First test of Caesium-Magnetometry in the Murghab Delta Project (Turkmenistan) 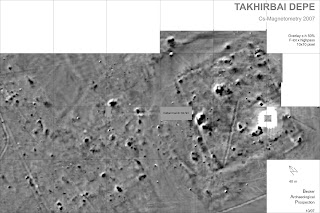 Magnetic prospecting for archaeology is applied since the 1950s (M .Aitken, Physics and Archaeology. Oxford 1974). For the use on large areas for landscape archaeology fast and highly sensitive methods are needed. Magnetometry was found to be the most suitable method for archaeological prospection. Especially caesium-magnetometry meets all the requirements for fast and high sensitive measurements. The development of this method is described in Becker, H., 1995. From Nanotesla to Picotesla - a new window for magnetic prospecting in archaeology. Archaeological Prospection 2, 217-228. But there are also fluxgate magnetometers in use for archaeological prospection, but these instruments have a 100 fold less sensitivity than caesium-magnetometers. They should be used only in areas with high magnetization contrast and near surface archaeological structures,

The magnetic prospecting during 8 days in October 2007 with a high sensitive caesiummagnetmeter in the Murghab Delta Project may have been the first application in Turkmenistan. The instrument used for these test measurements was a Geometrics G-858 G caesium gradiometer with 2 sensors. The sensitivity of this instrument is in the range of 10 to 50 pT (Picotesla) at a cycle of 10 Hz (10 measurements per second). The 2 sensors were configured horizontally with a distance of 0.5 m, which allows the measurement of 2 profiles in one run (total field measurement). At normal walking speed the sample rate on the profile was in the range of 10 cm. The magnetometer in this so-called duo-sensor configuration was mounted on a wooden frame and carried at walking speed over the area. A metronome controlled the sampling and the walking speed. This method makes the coverage of 1 hectare at a resolution of 0.5 x 0.1 m in 3 hours possible.

Several areas were chosen for testing the caesium magnetometry in Turmenistan. All sites were situated around Sovkhoz at a distance of 1 or 2 hours drive by car. Besides 2 small areas at Sovkhoz Bayram Ali and a Andronovo culture site with site no. 1468 two rather big sites (Takhirbai Depe and Togolog I) were measured in 2 or 3 days each. It became evident that in all these sites caesium magnetometry can give important contributions to the knowledge of an archaeological site. This was even possible at sites, which had been excavated before. After these promising results of magnetic prospecting for archaeology the method should be applied to a greater extend in future projects in Turkmenistan.