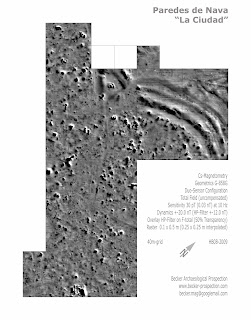 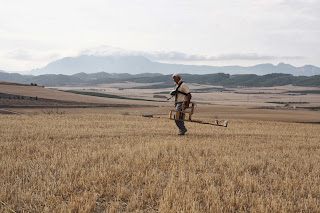 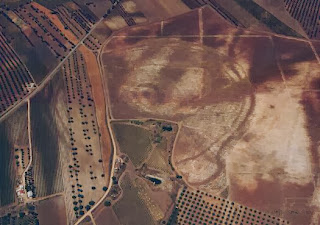 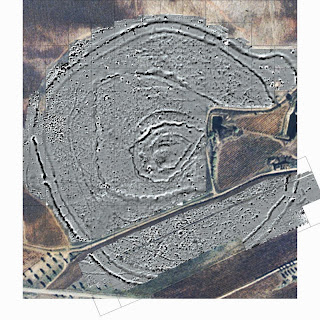 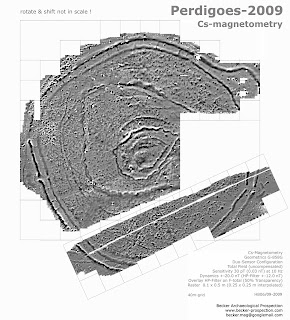 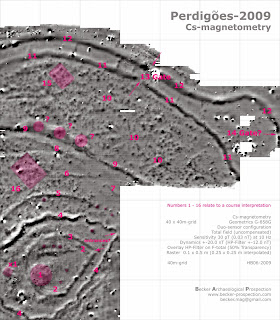 Remarks about a course interpretation for the “central area”

The co-called central area of the enclosure of Perdigoes consists according to the test for cs-magnetometry (June 2009) of the following features (see fig. 1b with numbers 1-16):

1          The “black spot”, well visible in the first aerial photo from the site after plugging as soil-mark  (oblique view from 199x). This is also visible in the magnetogram, but more grayish with internal structures. Also in the magnetogram there is a rim around the “black spot” partly visible with a positive magnetization contrast (dark gray to black). This could be caused by a biogenic magnetization of a wooden construction. The diameter is about 22 m.

3             The enclosure ditch (3) has a width of about 2–3 m; on the NE side the ditch is straight over a length of 50 m (on this side is also the strongest magnetization contrast and the greatest width). The double palisade follows the trace of ditch (3) on the interior side. At the northern end of the linear part there is an entrance (interruption of the ditch).

4          Another enclosure ditch (4) with a “bastion like” shape is also almost linear on the SE side like ditch (3) – the ditches (3) and (4) are forming a passage like feature (a cursus?). At the end of this linear segment (NE) there is an interruption in the ditch that could mark an entrance. The ditch (4) is 3 to nearly 5 m wide (at the northern side) and has a very strong positive magnetic contrast, which mabe caused again by a burnt filling. This also causes a strong magnetic “shadow” to the north (white band). In some of the so-called bastions little circles are visible (positive magnetic contrast) with an diameter of about 5 m – possibly little round houses.

5         Another enclosure ditch (5) was found almost at the same distance than (3) to (4) on the north side, but the main part may be outside of the measured area. This ditch is about 3 m wide and has no bastions. Possibly this ditch (5) also belongs to the central enclosure, but further measurements are need to mapping the full extend. The ditch (5) ends on the NE side, but there are some pits, which could also belong to this ditch system (5).

X1     There is a big number of pits all over the place and also in the central area. But in the central area the distribution of pits is less compared with the “pit-belt” between ditch (9) and (11). Some of the bigger pits in the central area are marked in fig. 1. About 20 m west from the “black spot” (1) there is another positive magnetic anomaly with an magnetic shadow going round, which could be a congregation of pits or a underground structure made from magnetic stone (slate or shists?). The size of this structure is about 8 x 8m.

The “black spot” (1) certainly does not belong to the other enclosures in the central area. It cuts the double palisade (2) and must be therefore later. Also the location hard at the side of ditch (3) is an argument against the “black spot” as the central feature. It could be much younger or even modern (small water basin).

The planned trench in the central area for the excavation in summer 2009 is mainly set on this “black spot”. Therefore it would fail the verification of the double palisade (2). It would be more adequate to shifting the trench about 15 m to the SE (the exact measure should be taken from the AutoCad map). Then it would be possible to see the ditch (3), the double palisade (2) and a smaller section of the “black spot”. 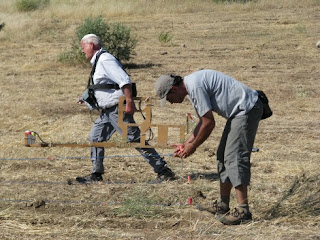