Preliminary report about a Caesium-magnetometry at Lothal (Gujarat, India) in March 2008 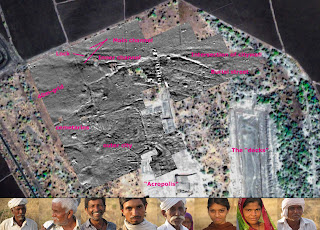 Fig. 1 Composite of the magnetogramm over the satellite image from Google Earth with some of my workers.

Following the ideas and the invitation by Prof. Maurizio Tosi (University of Bologna-Ravenna, Italy) a first test measurement for magnetic prospection was undertaken at Lothal, a port of the Harappan Civilization in the inland near the Golf of Cambay. It was supposed, that any Harappan site would bear the ideal conditions for a magnetic prospection because of the mixed use of sun-dried mudbricks and also baked bricks for their buildings. Also a first test should be undertaken for mapping the exact course of the ancient canal of Lothal connecting the site with the main river system and the Golf of Cambay for trading overseas especially to the Arabian coast at Oman, where import from Harappan Civilization was found in the recent excavations of the Archaeological Institute of Bologna-Ravenna (see also S. Cleuziou & M. Tosi “In the shadow of the ancestors” – The prehistoric foundation of the early Arabian civilizations in Oman, Ministry of Heritage & Culture of Oman, 2007).
The magnetic prospecting during 10 days from February 25th to March 8th using a high sensitive caesiummagnetometer in the Lothal Harappan Port Project may have been the first application in India. The instrument used for these test measurements was a Geometrics G-858 G caesium gradiometer with 2 sensors. The sensitivity of this instrument is in the range of 10 to 50 pT (Picotesla) at a cycle of 10 Hz (10 measurements per second). The 2 sensors were configured horizontally with a distance of 0.5 m, which allows the measurement of 2 profiles in one run (total field measurement). At normal walking speed the sample rate on the profile was in the range of 10 cm. The magnetometer in this so-called duo-sensor configuration was mounted on a wooden frame and carried at walking speed over the area. A metronome controlled the sampling and the walking speed. This method makes the coverage of 1 hectare at a resolution of 0.5 x 0.1 m in 3 hours possible. But this was not possible at Lothal because of the very dense coverage of the area by bushes and trees. At Lothal an area of about 6 hectars was covered with a spatial resolution of 0.1 x 0.5 m (about 1.2 Million measurements) in 10 days. After correction and resampling to 0.25 x 0.25 m resolution digital image processing technique was applied for further visualization.

For the field work a 40 x 40 m grid was marked by wooden stacks covering almost the North-West part of Lothal. The main line of the grid was fixed parallel at a distance of 7 m to the northern fence of the protected area. Also this grid was fixed by high precision GPS, it is highly recommended to fixed the precise position of the 40m-grid with a total station. The magnetograms can be used then as one layer in a GIS consisting of satellite image, aerial photos, topographical maps and all plans of the excavated areas. With this technique the optimal conditions are given for a detailed archaeological interpretaton of the magnetometry.

But even on the base of the magnetometry a first archaeological interpretation can be undertaken. It was possible to follow almost he whole course of the western canal from the main river to the inlet into the docks. The construction of the canal shows a highly developed technique with the installation of a inner canal in wide outer banks (about 30 m) using also a lock for regulating the water level for the traffic of the boats. This canal seems to bee even older than the city wall, overlaying this canal over a length of more than 80 m in this area. At this time the canal was certainly no more in use and had been partially destroyed by flood damage. Inside of the northwestern city wall a system of 2 streets are visible in the magnetogram, but also very clearly some buildings which may be interpreted as burial buildings with small rectangular enclosure walls. Therefore at least one of the streets must be interpreted as a burial street. But there were also some buildings with mudbrick-walls found outside of the city wall.

Even after this first test of high resolution caesium magnetometry at Lothal many aspects of very interesting archaeological evidence could be found.The extension of the magnetic prospection of the whole area of Lothal is therefore planned for the coming 2 years. It would be of course also very interesting to undertake the prospecting of another non excavated Harappan site with this fast and non destructive method. 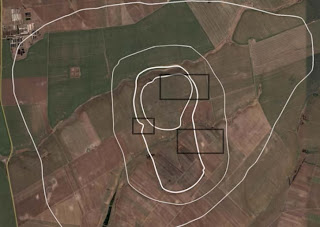 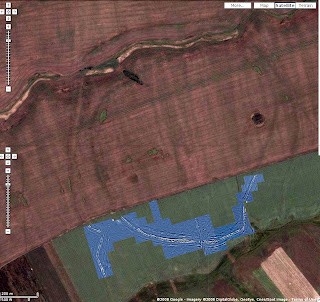